On Saturday, April 21, farmers, environmental advocates, veterans, artists, and community members came together to share testimony and review the record concerning Monsanto’s impacts on eastern Iowa and the world. The event is the second in a growing series of hearings intended to raise awareness of the local impacts of the agribusiness giant while asking broader questions about the capacity of existing law to promote social and environmental justice. You can view the testimonies from Iowa City here.

As the nation’s top producer of both corn and soy, the state of Iowa is shaped by the practices of Monsanto in countless ways. Iowa produced 20% of US corn crop for 2011, and, with more than 85% of that genetically modified, almost no place in the state is left untouched. While opinion is sharply divided about GMO crops, many of their promised benefits–reduced pesticide use and greater profits for farmers–have failed to materialize, and a mounting body of evidence suggests dangers to human health, damage to our soils, and the development of resistant pests and superweeds. The rapid adoption of GMO crops constitutes the biggest uncontrolled experiment in human history. Some in our communities continue to cope with the toxic legacy of historic Monsanto products such as PCBs, and local veterans, farmers, and farmworkers experience chemical sensitivities due to exposure to pesticides. The evolution of Monsanto from a chemical to a biotech company has entailed a massive consolidation of agricultural infrastructure, and the company grants millions for academic research each year. At every level–from our soils to our universities–Iowa is clearly impacted by Monsanto in countless ways. 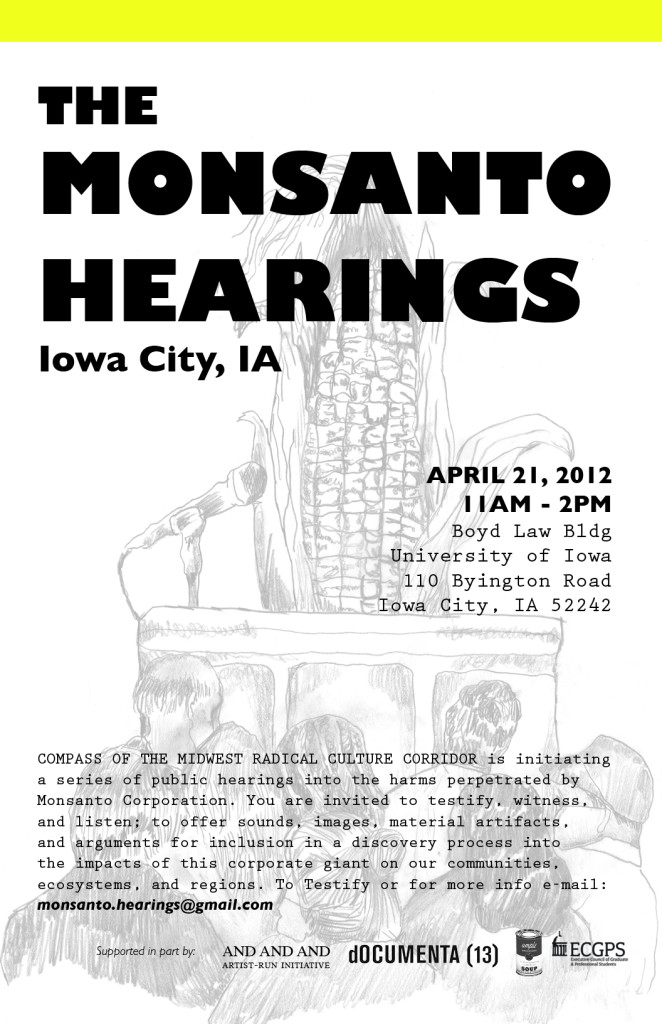 The Monsanto Hearings provide a public forum for a community to speak to the harmful effects of these impacts. A trial is a familiar form, a vehicle for evaluating harms, assigning responsibility, and making restitution. At the same time, existing law often limits who has ‘standing’– the right to make claims and be heard — and insists that damages be measurable in dollar value. The Iowa City hearing takes a different approach by considering all living beings as potential plaintiffs. What, for example, what might bacteria in our soil have to say about the pesticide Round Up? Is there a connection between Monsanto and the collapse of bee colonies? The hearing therefore presents creative or artistic testimonies alongside more traditional forms of witness.

The Iowa City hearing is sponsored, in part, by the art fair documenta13, the AndAndAnd artist-run initiative, Iowa City SOUP, and the University of Iowa ECGPS.